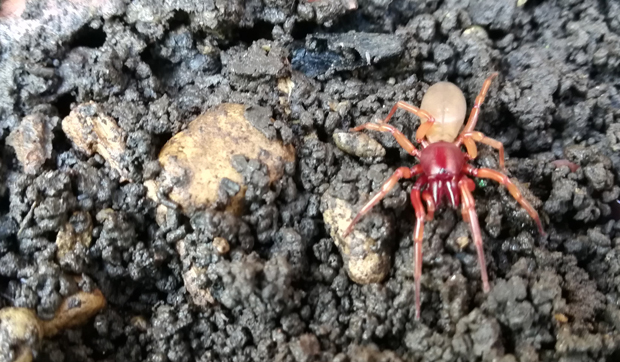 Noted for its red coloring and large fangs, the woodlouse spider is named for the prey it often consumes.

In these days of physical distancing and social isolation, the sight of a familiar face can bring immeasurable joy. Even, it turns out, if that face is brick red, with six eyes and two large fangs.

(Okay, I suppose it helps if you’re a naturalist or spider fancier, or at the very least able to squelch the primal instinct to yelp and squash the likes of such startling wee beasts. But even if not, stick with me on this one. This little critter’s a real hoot!)

Last Wednesday had started out pretty much like any other work-at-home day, a routine that has become my new normal: feed the pets, play with the dogs, fight the cat for the laptop keyboard and get down to business. But that morning, around 9:30, the warm sunshine and birdsong beckoned, so I decided to move the office, as it were, outside. And that’s when the day took a turn.

Looking down from the deck to the yard, I saw the compost bin was a literal hive of activity. Small creatures of all types were bustling about, hovering over the lid and climbing in the holes, no doubt tending to their important jobs of breaking down my coffee grounds, banana peels and yard waste.

It occurred to me that it had been awhile since I’d given the bin a turn, and my dog Joey was begging for another round of fetch, so we headed down the stairs to the lawn. I tossed the ball and whilst waiting its return, tipped the compost can on its side. And that’s when I saw her.

This species, also known as the woodlouse spider, is exactly the sort of underdog I for which I like to cheer. It’s not the biggest spider around (that honor goes to the Dolomedes fishing spiders) nor is it the spider species that, judging by emails and voicemails, attracts the most attention. (That category actually is tied between wolf spiders and orbweavers like garden and house spiders.)

What the woodlouse spider brings to the table-well, actually brings under the table, as the species is famously photophobic, or afraid of light-is an assortment of features that should be the envy of nature enthusiasts everywhere.

Let’s start with those fangs, which protrude quite notably from the jaws, or chelicerae. They’re over 1/8-in. long, which is an impressive for any spider, let alone one with a body 1/2-in. long, not including the legs.

But as is so often the case with animal physiology, those long, sharp, venom-injecting organs aren’t there to vex humans. Rather, they are exquisitely adapted to helping the spider subdue its namesake prey-the group of critters known communally as woodlice.

You might know these guys better as roly-polies, sowbugs and pillbugs. Their hard, segmented exoskeleton and multitude of legs, along with a few other less obvious characteristics, cause us to classify them as isopods, which are a type of crustacean.

Let’s digress for a moment, and reflect upon the last time you ate a crustacean. In fact, let’s get specific and envision that king of crustaceans, the lobster. A tough exoskeleton, so vital to the lobster while living, poses a considerable barrier when arrayed on a platter. It’s pretty, and pretty tough. You likely had to perform a considerable amount of peeling and/or cracking, followed by probing, to get to the good stuff. You might’ve even worn a bib.

The woodlouse spider, by contrast, feeds on crustaceans as if they were popcorn shrimp. Okay, maybe that’s a bit of an exaggeration. But still, D. crocata is so efficient at what it does, it makes the rest of us crustacean consumers look like rank amateurs.

For starters, D. crocata is an active hunter. It doesn’t spin a sticky web to capture its prey; it instead relies on stealth and speed, surprising and overpowering its dinner under the dark of night (or amid the dark recesses of compost bins, rock piles and logs, should it be ambushing breakfast or lunch.)

Powered by strong chelicerae, which can open to an inspiring width, the fangs pierce the crustacean’s body; the venom, which is not particularly harmful to humans, immobilizes the prey and ingestion soon follows-no bib required!

That morning as I pondered the woodlouse spider under the compost bin, I couldn’t help but feel a kinship with her. There we were, both isolated but also intricately connected to our surroundings-me with my dog and his ball, she with the roly polies and other creatures of the soil.

My rude intrusion, and the resulting glare from the bright sun, caused her to put her little legs up over her six eyes-much the same way I do when woken indelicately. (Well, except that I use my arm, and shield only two eyes.)

And then there was her abdomen, grayish tan and somewhat bloated-not unlike an engorged tick. After five weeks at home with a well-stocked pantry…well, let’s just say I can relate.

As we look at yet another week of shelter-in-place, you might want to get to know some of your less familiar nature neighbors. Poke under a log or peek under a rock. And if you happen upon a woodlouse spider, tell her I say hi!