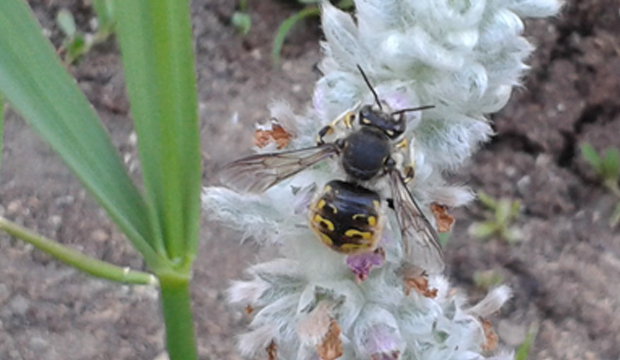 What’s that buzz? European wool-carder bees are noted for their loud sounds, as well as their attraction to fuzzy-leaved plants.

I got quite the buzz while working in the garden the other day.

No, I’m not growing the devil’s lettuce. And I wasn’t slaking my considerable thirst with anything you need to be 21 to buy. I suppose to a certain extent I did experience a natural high-the kind you get from tending to plants that do more than just look pretty. My “garden,” such as it is, is a mishmash of native plants and rugged ornamentals that are home to a thriving community of helpful insects, which in turn attract a thriving community of birds and mammals…myself included. But I digress…

That buzz I experienced wasn’t the kind you feel, but rather the kind you hear. I realized I wasn’t alone in my garden reverie; I’d been joined by Anthidium manicatum, the European wool-carder bee.

If your own garden contains some plants with fuzzy leaves, you might be familiar with the kind of buzz I’m talking about-a continuous droning so loud, I thought at first it came from a distant chainsaw.

When I located the source of the sound, I had to look again to figure out just what I was seeing. At first glance, this bee moves and looks like a hover fly-insects with prominent black and yellow markings that often are mistaken for bees or wasps, except for one thing: They have only one pair of wings.

Bees, and virtually all other winged insects, for that matter, have two pairs of wings. When I looked closely at this loud individual who’d joined me in my garden reverie, I definitely saw four wings total.

I tried to focus on spreading the compost I’d cultured, but instead kept finding myself drawn to this curious newcomer. It would buzz around the lambs ears (Stachys byzantina), land, then buzz around some more. As I watched I noticed a pattern emerging. The bee took flight each time another insect flew near. It was almost as if the bee were guarding a territory.

I eventually abandoned my trowel and bucket completely, and plopped down to watch the show. I soon noticed that there were a few other bees, also on the lambs ears, that were allowed to stay. They were smaller than the big, noisy guy, and they seemed very absorbed in their work of visiting the Stachys flowers.

When I felt like I’d seen enough, I pulled out my phone and clicked into my favorite on-line field guide, BugGuide.net. A few more taps and I’d found the answer I was looking for.

As their name indicates, European wool-carder bees are not native to the United States. Sources differ on how the introduction was made, but it likely was accidental and appears to have occurred in the 1960s, probably in New York State.

Like other wool-carder bees-and we do have several species that are native to North America-the European wool-carders belong to Megachilidae, the family of bees known as leaf-cutters. However, instead of chewing and removing (“cutting”) sections of leaf, female wool-carders scrape off, or “card,” the downy fuzz, or “wool” that is present on certain types of plants. This soft material is then used to line the cells of their nests, which typically are located in crevices in wood.

While the females busy themselves with homemaking, the males-like the big, loud guy I saw and heard-aggressively protect the area by attacking anything that dares fly past. They use their considerable bulk to butt away any perceived threats, including beetles, butterflies and other bees. Although they have no stingers, these big males do have several spiny projections near the rear of their abdomen that they can use if they feel additional force is necessary.

As an introduced species, the European wool carders naturally inspire concern. Their native checks and balances do not exist here in the States, and their tendency bash intruding pollinators makes them seem brutish and bully like.

But so far anyway, their impacts seem minimal. While male European wool carders have been observed killing honey bees-which also are European in origin–they do not singly target this species and have not had any significant impact on its population.

Another helpful trait is their penchant for host plants from their homeland-basically, the many non-native species we grow in our flower gardens: lambs ear, mints and even mullein.  By contrast, our native wool-carder bees tend to visit plants indigenous to the U.S.

If you, like me, plan on spending some time outdoors this weekend, and happen to know where some fuzzy-leaved plants grow, give them a look-and a listen. Drink in all the sights and sounds, and maybe, just maybe, you’ll be lucky enough to get buzzed…by a wool-carder bee.