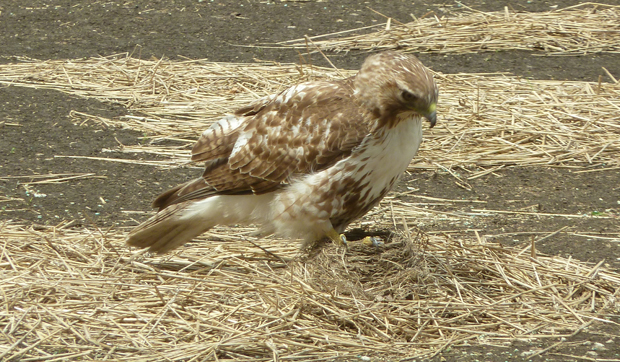 Photo Caption: A young red-tailed hawk reacts with dismay upon discovering the nest it obtained was empty.

Certain signs of fall are unmistakable. The changing colors of the leaves, the masses of migratory geese. And the persistent, almost petulant, calls of young red-tailed hawks being asked-more like told-to leave the family territory and strike out on their own.

I can remember the first time I watched this behavior. It was several years ago, as I was waiting for a busload of school kids to arrive for their first field trip of the fall. A juvenile redtail was sitting at the top of an oak tree, screaming his head off, while his parents piped in with additional scolding screams from the sky.

And I do mean scream. The call of the redtail, variously described in field guides as a raspy, descending cry or “keee-eer” sound, is synonymous with birds of prey. (Fun fact: Hollywood often uses the sound of a redtail to represent any raptor, including the bald eagle-whose calls, in real life, include a wimpy, high-pitched whistle. Next time you hear what you think is a dog’s squeaky toy up in a tree, take a look; it might just be our majestic national symbol, peeping like a pipsqueak.)

(Fun fact No. 2: Some blue jays do a spot-on imitation of a redtail keee-eer. When you hear the sound, see if you can put your eyes on the source to determine whether it’s an actual hawk, or a blue jay pretender.)

As determined as Junior was to dig in his heels, or I guess talons, and stay put, Mom and Dad were equally set on getting their offspring off on his own. The woods where the pair had raised their young could only support so many hawks, and the time had come for their little pride and joy to head off and find a territory of his own.

The bickering, if you want to call it that, kept on for several days, from various parts of the woods. And then, one morning, all was quiet. I caught a glimpse of one of the mature redtails later on that day, and saw both the male and female frequently throughout the following winter. But I haven’t any idea where their vocal youngster ended up; I doubt they do either.

However, I do know where one young redtail ended up-virtually on our doorstep here at Hickory Knolls.

It was early spring when we first noticed him/her (I’m leaning toward female, given this bird’s considerable size; as is the case with most birds of prey, females are up to one-third larger than males) in early spring. Having survived the winter, the young hawk had already beaten some pretty tough odds. Typically, only one in three redtails make it through their first year.

Although it was easy to tell by its plumage that our redtail was young-its tail feathers were banded, not red-we could also tell by its behavior.

Mature redtails have a certain finesse about them. They sit regally on a tree branch or light pole, intensely scanning their surroundings with their keen hawk eyes. They spot their prey, swoop down and, if luck is with them, swoop back up with a hearty meal. Easy as pie, without the toilsome crust and no baking required, and so, so cool.

Our redtail, however, was anything but. She was clumsy; she was awkward. But she also was unwavering in her will to survive. She picked through leaf litter in the gutters on the roof. She scavenged worms from the cracks in the sidewalk. And she diligently scraped away at the flattened rodent out on the driveway, intent on gleaning whatever grams of protein that remained.

One day young Red made an especially bold move and flew full-bore toward our west-facing lobby windows. A robin had made a nest on one of the sills, and I’m sure our youngster anticipated an easy meal of eggs or warm hatchlings. Wings and talons spread, she stopped within inches of the thick glass, plucked the nest from its niche and landed with it several feet from the building.

Her efforts, however, were fruitless, since the nest was brand new and, alas, empty. I don’t think the hawk could quite believe her rotten luck. She stared into the nest, with first one eye and then the other, for several minutes. The look on her face said it all: “Phooey!”

Today, though, it’s a different story. Now well into her second year, our redtail still pops up in some surprising locations-a 6-ft. tall arbor in the community garden plots is a favorite perch. But her demeanor is one of a hawk who’s starting to “get it.” No longer having to make due with earthworms and teensy roadkill, Red takes careful stock of the plentiful prey in the gardens. Mice, voles, even 13-lined ground squirrels are all fair game.

I hesitate to project, since the mortality rate for second-year redtails is still 40%. But I’d like to think that in a year or two, our Red will be screaming, letting us know that fall is here. But rather than protesting unwanted independence, she will be encouraging her own young to take wing and begin lives of their own.