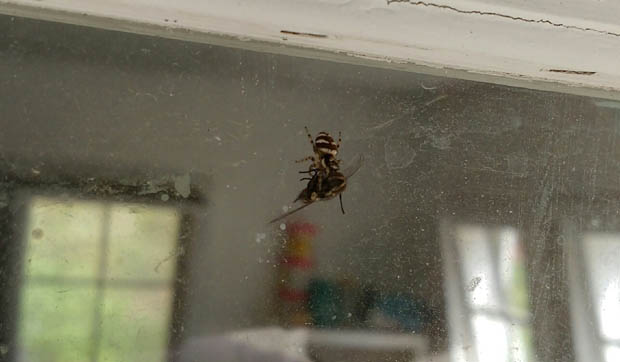 This zebra jumping spider is hard at work doing what it does best, controlling populations of pest insects.

Recently my nature coworkers and I got the chance to spend some time at Primrose Farm, another fine outdoor education facility operated by the St. Charles Park District. We were just doing our jobs, which that day included unloading five wagons full of hay and stacking them in the barn.

The work was physical, for sure, but the camaraderie amid the quaint surroundings more than made up for the heat and humidity and endless dust that come along with tossing bales.

And then there were the jumping spiders.

Unlike the rest of the crew, who’d planned ahead and brought plenty of water to drink, I had only my travel mug of hot coffee. Delicious as it was, it had pretty much lost its appeal by 10am. So it was that during the times when the wagons were being changed out, I’d head over to the milk house for a drink of cold well water.

That’s when I saw them. The zebra jumping spiders were having their, um, heyday too.

Zebras are particularly engaging. They’re small, as spiders go, with a body length that maxes out at less  than half an inch. But their bold markings combined with their animated nature make them hard to miss.

Like other jumping spiders, zebras don’t spin a web in order to catch their meals. Instead they rely on stealth and sharp eyesight. Eight orbs (two large, two medium and four small) arrayed across the front and side of the head allow these superb hunters to spot even subtle movements. Slow stalking followed by a quick jump let them make quick work of unsuspecting prey.

Speaking of, let’s take a closer look at that jump. Vertebrate leapers like gazelles, rabbits and Mike Powell, the world’s record holder for long jump (yes I had to Google that) as well as most invertebrate jumpers like grasshoppers rely on muscles to propel their bodies forward. Not so for jumping spiders. Instead these marvels of movement use hydraulics. They create a rapid increase in blood pressure in their legs, which straightens the joints and launches the spider forward.

Even though jumping spiders don’t spin webs to catch prey, they do produce silk. They’ll often leave a little trail of it behind as they jump, in case they miss their mark and need to go back and try again. They’ll also descend from high places using a strand of silk, and spin little lairs when they feel like retreating to molt or hibernate. Females also produce silk sacs to protect their eggs.

We seem to be in the midst of a jumping spider boon these days. I saw an amazing example of a black and fuzzy Phidippus audax, the bold jumping spider, at my friend Suzi’s last week, and counted three zebras at the Pottawatomie Community Center when I was there for a meeting the other day.

Then there are the zebra jumpers I got a chance to watch at Primrose Farm. Each time I headed to the milk house for a drink I’d check on them and was amazed at how busy they were helping to control the insect population in and around the barn.

Like the rest of the park district crew, they were just doing their jobs.